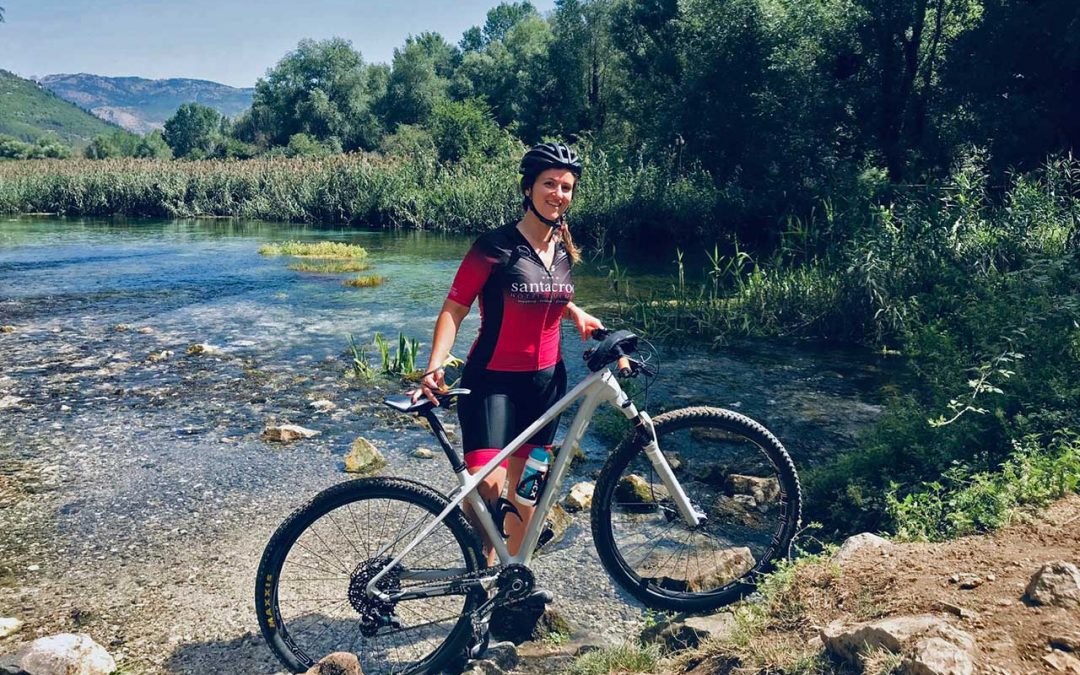 Our TREKKING TEAM is at your disposal to accompany you to the most beautiful natural corners in Abruzzo.

MONTE AMARO
This is a long and fascinating itinerary for expert hikers to conquer the highest peak of the Majella Massif, Monte Amaro. It sits at 2792 meters above sea level. The departure from Fonte di Nunzio on path P5 gives unexpected sensory experiences. The contrast between the subtle scents of the beech forest that mix with the high mountain herbs of Fondo Majella, Valle di Maschio Morta and Altare dello Stincone create emotions difficult to describe. The 4 hour walk above 1500 meters in altitude creates fatigue, but, there it is, in the distance we see a red hut, the Pelino Refuge. We have arrived!

CORNO GRANDE
The highest peak of the Apennine Range, and one of the most fascinating peaks in Italy, the Corno Grande (2912) is the highest peak of the Gran Sasso d’Italia. Get ready for the approximately 3 hours of walking that await us. As we leave the Astronomical Observatory and then the Duca degli Abruzzi refuge behind us, we find ourselves immediately catapulted into an environment that recalls the most evocative alpine landscapes. We travel among glacial moraines, green meadows and breathtaking ridges. Now the path climbs steeply, difficult but manageable, we traverse a diagonal of stones that lead us to the beginning of the only remaining Apennine glacier, the Calderone. Now the summit is close, we have reached the roof of Abruzzo.

THE HEART’S PATHWAY
Lake Scanno, the heart-shaped lake, is the true heart of Abruzzo. The well-marked and so called “Path of the Heart” begins from a river bank, and leads, after a gentle climb, to the Hermitage of Sant’Egidio, a saint beloved by the inhabitants of Scanno (the Scannesi). The small physical effort required to complete the route (about 2 hours of walking, round trip) is immediately rewarded by one of the most famous and iconic panoramic views of Abruzzo. A heart-shaped mirror of water surrounded by the Marsican Mountains with the Montagna Grande undisputed protagonists of the landscape.

THE BLESSED MARIAN WATER SPRING
The Morrone Massif was the favorite mountain of hermits and full of the lore of miracles. In one such legend, a young man named Domenico, originally from Roccacasale, was on the slopes of The Morrone, precisely in the Valle dei Preti, with his sheep when, exhausted by the heat, he fell asleep. Upon awakening he found a source of water sprouting beneath his head. From that day forward, a pilgrimage from Roccacasale is held on a path suitable for all ages and abilities. The 3 hour trek retraces the steps of Blessed Marion, and leads to a water source 900 meters above sea level. This is the only source of water on the arid western side of The Morrone.

EREMO CELESTINO and THE SANCTUARY OF ERCOLE CURINO
Also called “The mountain of the Great Refusal,” this is the spot, chosen by Pietro Angelerio, then Celestino V, to discover his own spirituality. This western side of The Morrone Massif also inspired Ovid to write of love. One of the most important and sacred areas of Abruzzo, the location features a Hellenistic sanctuary. This special place is easily reachable from Sulmona from the borough called Badia on a comfortable dirt path which has been recently reopened. It starts near the church of the War Fallen and continues on a comfortable and panoramic asphalted road.

CAPOPESCARA
One of the most ancient and protected areas of Abruzzo is immersed in a unique natural setting at the foot of Colle Capo Pescara. It is part of the municipality of Popoli, the birthplace of Corradino D’Ascanio, father of the helicopter and the Vespa. In his youth, Corradino found inspiration for some of his most brilliant inventions on the banks of the Pescara river where he observed the flight of dragonflies and crickets. The green and blue pools of water, the luxuriant and bursting vegetation “contains many answers,” observed Corradino, “it’s just a matter of going and looking for them in the right place.”

ROCCA CALASCIO
Located on a ridge at an altitude of 1460 meters in the Gran Sasso National Park. Rocca Calascio sits in a strategic position that is part of a network of defensive structures that reach the Adriatic Sea. Overlooking Campo Imperatore and the Tirino Valley, the castle di Rocca Calascio is ranked as one of the most beautiful fairytale castles in the world by National Geographic. The view from the castle is an emotional experience that leaves an indelible memory.

THE ORFENTO VALLEY
Declared a nature reserve in 1971, the Orfento Valley is the only canyon of the Majella Massif to be crossed by a perennial stream. It is considered by many to be the heart of the Majella National Park (1995). A succession of waterfalls, natural stone ladders, and wooden bridges immersed in unspoiled nature, have over the centuries welcomed men in search of solitude (hermits) and fugitives from the Second World War who here found shelter. The immense rocks left bare by millennia of erosion by the nearby stream fills one with the awe and wonder of nature.

MONTE GENZANA
The long and imposing ridge line runs among the most panoramic areas in Abruzzo. We are in the watershed between the Alto Gizio and the Valle del Sagittario. This is Monte Genzana (2170) the undisputed territory of the Marsican bear. From here one finds a privileged position to observe the mountain landscape of the Abruzzo hinterland in all its splendor. From the summit, reachable with loop circuits for hikers with gradients of about 1000 meters, you can admire the Majella Massif, Mount Morrone, the Gran Sasso, Mount Sirente, Mainarde and the peaks of Camosciara (just to name a few) under a blue sky that seems painted.

THE LAVINO SPRINGS
A forty-minute walk in the woods can offer many pleasant sensations. However the amazement that the Sorgenti del Lavino Park in Decontra (PE) gives us can only be experienced in such a place and that is, in Abruzzo. An ancient mill of the sixteenth century (the Farnese Mill) is surrounded by blue and turquoise waters that flow from sulfur springs. The area is surrounded by poplar trees, white willows, and elder woods. Both senses of smell and sight are held captive by this trek and leave the traveler wishing to rejoin this magical dance of nature.

MONTE MILETO
The “ladies path” (Q4) on The Morrone Massif begins directly behind the hotel of Passo San Leonardo and gradually enters the lush and dense beech forest. The 2 hour trek is often solemn, sometimes severe. Yet it becomes almost mystical when it opens upon a vast green mountain plateau rich with the intoxicating scent of mountain herbs, especially the orapo, or mountain spinach. A short stop at the Capoposto Refuge (1755) to recover some energy, a quick greeting to a shepherd and his herd of sheep, and then it’s off to conquer Monte Mileto (1920).

COLLE MITRA
At the southern edge of The Majella National Park, Colle Mitra stands firm. It feels no envy, despite its relatively modest 1067 meters, for its much taller and austere brothers that surround it and dominate the Peligna Valley. Chosen since ancient times as an outpost by the first civilizations that inhabited the valley (the archaeological Roman site at Ocriticum is a prime site), it can be reached by a gentle walk over slight slopes both from Sulmona (AQ) and Cansano (AQ). Follow the historic “Freedom Path” traveled by soldiers who fled from the German army during the Second World War.

PETTORANO ON THE GIZIO
Considered one of the most beautiful villages in Italy, it was chosen by the Normans in the 11th century as the site of one of their main fortresses in the Peligna Valley. Only the pentagonal tower remains from Norman times. Inhabited subsequently by the Swabians, by the Angevins, and eventually the seat of the Cantelmo family that defended the village for hundreds of years. Although much of the village was destroyed in the 1706 earthquake, enough of the splendor of the past is still visible in the village’s meandering streets and in the local traditions that distinguish the Pettoranesi and have sustained them over the centuries.

PACENTRO
A mysterious intertwining of white alleys, a castle, ancient stone adorned arches, steps carved in stone that rise and fall as if suspended in air, panoramic mountain roads that wind like long snakes with sharp hairpin turns. We reach a terrace, it overlooks the entire Peligna Valley. We are entering the western zone of The Majella National Park. These are just a few images that allow Pacentro (AQ) to proudly display its membership in “The most beautiful villages in Italy” club. Pacentro is a village full of history and tradition, not least among these is “La Corsa degli Zingari,” or The Race of the Gypsies, held yearly and at its 570th edition.

THE ANTWERP OF ABRUZZO
The charm of Anversa degli Abruzzi (designated as one of “The most beautiful villages in Italy”) with its Norman castle and feudal lords, inspired Gabriele D’Annunzio, during a brief visit in the early 900s, to compose a tragedy called “La fiaccola sotto il moggio” or “The Torch Beneath the Bushel.” It remains one of his better known works.
The charm of this village along with nearby hamlet of Castrovalva, did not go unnoticed even by the well-known engraver Escher who, during his visit in 1929, was struck by the dizzying rocky spurs that seem to suspend the houses in both time and space.